Today we’d like to introduce you to Andy Dexterity.

After working extensively in theatre, film and television, most notably as The Mayor of Wiggle Town in the Australian children’s television program The Wiggles and one of the artistic directors of the Sydney Gay & Lesbian Mardi Gras parades, Andy Dexterity was invited to give a TED talk on the art of Physical Communication to standing ovations and a future of exciting adventures..

Having studied dance, mime and various signed languages, Andy’s skill set has led them to work on a multitude of creative projects including music videos for artists including Grammy-award winning singer Kimbra, commercial musical choreography including the Australian revival of RENT and most recently Andy brought classical music to visual life with The Sydney Symphony Orchestra for Pictures at an Exhibition at The Sydney Opera House.

A sudden green card visa lottery win has found Andy living in Los Angeles with the vision of producing inclusive and diverse content for children and families with an extra special focus on LGBTQIA themes.

Overall, has it been relatively smooth? If not, what were some of the struggles along the way?
The scene change from comfortable Sydney to wild LA has been an uncomfortable rollercoaster ride. High highs and low lows. I used to know people to call to make things happen and now, every step along the way I am starting from scratch. Never before has it been such a hustle! But I have been pleasantly surprised by the amount of people that want to help and contribute to making dreams come true.

Alright – so let’s talk business. What else should we know about your work and career so far?
Writing songs and creating dances that unify and connect people is where it’s at. Lyrics that celebrate difference and sameness with choreography derived from signed languages, not only allows Deaf and hearing impaired audiences access to the party, but it also exposes physical vocabulary to the hearing. Providing a new platform where everybody, regardless of background or ability can connect and celebrate. Content that gets people reorganising gender structures in their minds is really exciting, allowing more space for young humans to express themselves freely.

Any shoutouts? Who else deserves credit in this story – who has played a meaningful role?
Any collaborator that has ever invited me in always gives me space to explore and evolve. The work that I do today is culmination of everyone I have ever shimmied with and a product of what is not being attended to along the fringes. For that, I am forever grateful for everybody’s generosity and wisdom.

The creation of my TED talk really forced me to evolve. Having not spoken publicly since my high school debating team, I began writing down notes of what I might say. As body language is my preferred language, the idea of speaking words out loud to an audience of 5000 and hundreds of thousands more globally, really petrified me. However, in doing so, I began learning to trust my passion, and I remember sinking into my body mid-talk and found power in sharing something a little less common, and I love the thought that there are other people out there in the world that exactly feel the same way that I do.

Andy Dexterity has been announced as the choreographer for a new production of the musical Rent, which will open at the Hayes Theatre in Melbourne this October.

Dexterity is known for his unique movement style which fuses dance with sign language. He has named it “signdance”. A musical theatre performer, he discovered sign language as a result of a sea-change which saw him leave the stage in 2009. “I was performing back-to-back shows, in role after role, just because the work was there and I didn’t feel like I knew how to do anything else,” he says. “I moved out of Sydney, up the coast and found myself sailing a yacht, and to my surprise, I discovered that I was still dancing, only now, a pas de trois with the wind and the sea,” he recalls. “The time and space that was created away from the bright lights of the arts, allowed new hobbies to show their faces… knitting and sign language. I took a strong liking to them both, as there were no critics or egos to deal with…. just my hands and maybe some string. They both kept my hands moving and they both kept my hands warm – perfect for a cold winter on the water.”

It was “love at first sign,” says Dexterity of his first brush with sign language. “I was hypnotised by its ability to display such raw, honest human emotion during an information exchange,” he says. “I soon followed my fingers… and enrolled in a certificate course and began absorbing the traditional signs of Auslan (Australian Sign Language). Having an upbringing in dance made it easy to see a sign once and be able to execute it.”

Listening to Dexterity talk it is easy to understand why he is attracted to sign language. “It is one thing to put ideas on paper, but in magical “Handland”, you get to move thoughts straight from your brain to your body and hands,” he exclaims. “So much wisdom came to me though embodying my communication, and to watch others do the same in front of me is such an honour. I love playing with this lens of meaningful movement… each gesture, having the potential to communicate on some level, literally and poetically.

“More than anything, I still get excited to think that the outcome is always something that is accessible for deaf and hearing impaired audiences and also simultaneously introduces sign language to an unawakened sign crowd in an non-invasive, non-preachy way. Sign language is celebrated for what it is – a physical, visual language, utilised in a creative way.”

Thanks to sign language, Dexterity has returned to the stage. “I am performing again, only now my efforts are benefitting others beyond entertainment,” he says. “Whenever I spoke about sign language, it always led to a performance of some kind, which, over time, led to the birth of a few sign-language skits, which then led to some YouTube videos, which then led to the choreographing of some music videos and live events.”

Since then, Dexterity has landed some fabulous gigs. “In the last 12 months, I have worked on some pretty incredible projects that are all so different from one another,” he says. “I created signdance choreography for Kimbra, for her ‘90’s Music’ music video. My first large-scale signdance choreographic work premiered in the opening ceremony of the world netball championships and most recently, I have been conducting the Melbourne Symphony Orchestra for the Wiggles’s latest film.”

With a performance background in musical theatre, Dexterity is looking forward to working on Rent. “When Rent first came out, I was a geeky, shy, young boy,” he recalls. “Every Saturday would be spent doing back to back performing arts classes and at the school, the senior performance group did a jazz and tap routine to “Seasons of Love” [a song from Rent]. That’s when I fell in love with it. Not with the fusion of tap and jazz, but with the lyrics ‘five hundred twenty five thousand six hundred minutes…’ I never understood much of the show back then and most of the references went over my head, but its nice to have those early memories and be able to ground all these years of imaginings and experiences into a few hours of theatre.” 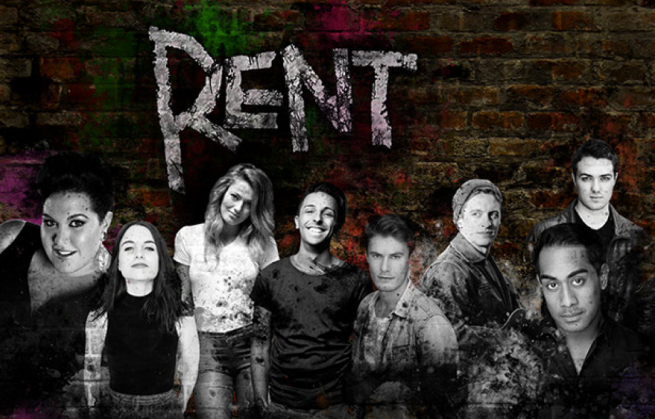 Jonathan Larson’s hit rock opera is set in New York’s East Village during the AIDS crisis in the early 1990s, when a small, embattled bohemian community pulls together to fight against the gentrification of their village.

Laura Bunting, who appeared on the first season of The Voice and understudied the leading role of Elphaba in Wicked, plays performance artist Maureen. Maureen is the girlfriend of Joanne, who will be played by Casey Donovan, the winner of the second season of Australian Idol in 2004. Since then, Donovan has appeared on stage in critically-lauded productions including The Sapphires and Flower Children.

Producer Toby Francis told Daily Review: “We wanted an eclectic mix of people who were fresh and people who had done more shows because that’s what Rent was about — that’s what the East Village was about: a huge variety of people.”

Francis also said he was looking for actors who could step away from the template laid down by the performers in the original production, most of whom went on to star in the 2005 film based on the musical.

“We went back to the text,” Francis said. “Not that we’re going to go completely off the wall, but we wanted to get back to what it was really like in the early ’90s and who these people actually were.”

Rent is one of just eight musicals to win the Pulitzer Prize for Drama and quickly moved from cult hit to international blockbuster when it premiered Off Broadway in 1996. This new production aims to take Rent back to its humble roots in the intimate space of the Hayes Theatre.

“We wanted to go back to that spirit when it was Off Broadway,” Francis said. “I think what people forget about Rent is that even though there’s this broad, sweeping motif, it’s also an angry piece. It came about at a time when the gentrification of New York City was really pushing a lot of people away, and when people were having to petition the FDA to have treatments approved for HIV and save lives. I think that anger can sometimes be lost in productions nowadays.”

The new Sydney production will be directed by Shaun Rennie with choreography by Andy Dexterity and musical direction by Andrew Worboys, and is produced by Highway Run Productions in association with Hayes Theatre Co.